I knew we'd made a record I was proud of and that was the most important thing but I'll tell you what the response to Good Luck, Take Care has been gratifying. Here are some highlights so far:

"The Last Great Christmas" is now live on Spotify. I have a lot to say about it but before you read all of that, I hope you'll listen to the tune and advise you to do so.

OK. You listened. Here's the story.

Every Christmas Eve we read a short story my wife's grandmother, Marion Norswing Phillips, wrote about her family's Christmas in 1917.

The story itself is breath-taking. Marion was a talented writer, one of the first women to attend UCLA and a drama critic at the Daily Bruin. The imagery of the high plains Christmas celebrated by Scandinavian immigrants is intricate and impeccable. And then, after Marion takes us across the fields to grandmother's house, to Christmas Eve & then Christmas Day, she lets us know that it's more than just a pretty story about a special day. It's a pretty story about the family's last Christmas before the 1918 influenza epidemic that claimed her father's life, far too young.

I never met Marion, one of my great regrets. She passed away a few years before Lindsay and I found each other. And this year, this horrible year, this will be the first year since Marion's passing that Lindsay won't sit in her family's living room and listen to her mother read the North Dakota Christmas story.

A little over three years ago, a publisher in Nashville gave me an assignment. He said that artists are always looking for Christmas songs and asked me to write him one (I've come to understand that he makes a similar request of pretty much every writer he meets with).

I'm the son of a mixed marriage between a lapsed Catholic and a Jew who, at least when I was growing up, never went to temple. And I'm not a great fan of Christmas songs. I do like songs that take place on or around Christmas (e.g., "Christmas in Prison" by John Prine), for what that's worth. But a publisher in Nashville gives a songwriter an assignment, the songwriter's going to complete the assignment.

I found myself at sea. I sat down with a couple of ideas and fleshed them out but they didn't feel right, not even in the same time zone as "right". At some point, though, it occurred to me that I could try to take the North Dakota Christmas story and turn it into a song.

And I did try and it did become a song, a song that I played live a couple of times that year and I think the following year too and sent to the Nashville publisher. The family loved it. I knew that it wasn't quite there. The song wanted to say something else. I wasn't sure what. I set it aside, as I do with the vast majority of songs I write. A very tiny sliver of those set-aside songs ever come back to life.

But this year. This horrible year. When we talk to our grandchildren about this year, they won't believe us.

It took me until about December 1, when we decided that heading to Lindsay's parents' house for Christmas wasn't going to be feasible, to start to see the connection between the North Dakota Christmas story, my song, and the state of the world. I went out to the writing room, the shed, the "Manchaca", and over about four days, as the man once said, I chipped away at all of the parts of the stone that were not an elephant.

Exactly two weeks ago, I sent the song to Adam Dawson. As I said, I'm not a great fan of Christmas songs. And I harbor even less goodwill for topical songs, the vast majority of which are pertinent for a few months or a year, and then lose their potency. Adam listened. When things are important he doesn't text me, he calls. This time he called. He told me that we needed to release the song and we needed to do it as soon as possible.

Thirteen days ago, I called Jackson Emmer. I told him about the song. I told I wanted to try to record some parts and send them to him to have him mix them and master them and make them sound good, or at least better. And so I went out to the writing room, the shed, the "Manchaca", which gets really cold in the winter y'all, and I recorded some parts for him, the guitar with a couple of Shure SM58s with the windscreens screwed off and the vocal with a little apogee USB condenser mic. I didn't have a pop filter for the apogee so I pulled an old dress sock out of the drawer and draped it over the top. I sent Jackson the tracks, humbled as hell by the sound of my voice and my guitar without the bells and whistles and fancy preamps and compressors that give us a sense of security in proper studios.

I expected Jackson to text me and say "no this is a bad song and it sounds bad and I can do nothing with this" but instead, 11 days ago, a few hours after I sent him the tracks, he sent me back a mix that after I played it for Lindsay she cried a little and said "it has a very warm sound, kind of like a kitchen on Christmas." I uploaded the track to CD Baby. I gave Marion Norswing Phillips a cowriting credit. And here we are.

Glide Magazine premiered the track earlier this week and said "Klein sings with a trusted gravitas and polished reflection reminiscent of Guy Clark and Steve Earle" which I don't know about y'all I just don't know.

Apparently this has been a great year for the Christmas Tree business. And that makes sense. Instead of one big Christmas, we're having a handful of smaller Christmases. Lindsay's mom mailed our stockings to us. We got a little tree, our first ever. And also for the first time ever, we lit our menorah on each of the eight nights and said the Hanukkah blessing. I hope the neighbors looked in and saw our Christmas lights and us lighting our menorah and appreciated the peculiar American-ness of that.

If you know me, you know that my feelings about faith and the afterlife are muddled and conflicting and in constant flux. What I do believe in is the connecting, healing power of a song. I try to honor that belief in everything I share with you.

I've rattled on for long enough. Listen again. If you like it, share this with your friends. You can even buy a download from me by clicking HERE.

Be safe. That weird feeling, that unfamiliar feeling, well I think that might just be the tiniest little smitch of hope. See in you 2021. Tex has snuck its way into the Top 20 of the Folk DJ Chart. Check it out!

Terry played Anika and Oklahoma on Good Day Austin. Check it out here. 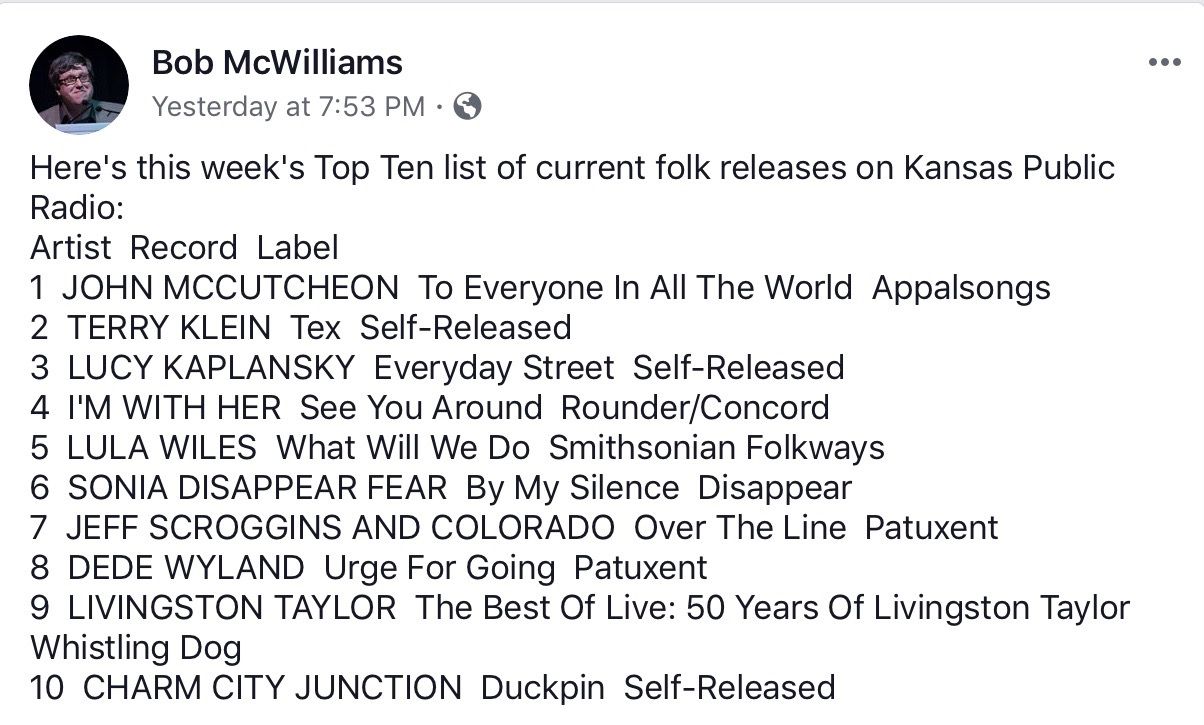 Andrew Gulden digs into the songs in his review of tex in Americana Highways.

Wide Open Country had some nice things to say about "Daddy's Store" in its premiere of the track.

OLDER NEWS THAT IS ALSO GOOD

Terry talks songwriting on Chris Strand's "Is There A Cover" Podcast here.

Terry is featured on the May 27th edition of Out of the Woods Radio here.

Terry is featured as one of "Rich's Picks" on Midnight Special here.